How to make faster Internet in Sudan

One of the issues when working in rural areas of Sudan is poor gsm reception and extremely low Internet speed. When I have volunteered for the archaeological expedition in El Zumah, Sudan, I’ve decided to check if can do anything about it and here’s what have happened.

First step was just like any project we do – proper analysis. I spoke with people that worked there in previous years to understand source of problem. Low Internet speed can have many sources, here are only some of them:

Those interviews suggested that Base Station is quite near but still Internet connection suffers. Second important information was that one from three mayor service providers work in that location:

Review of those providers websites revealed location of their Base Stations and thus confirmed above data.

What I’ve concluded is, in most cases, those companies place good performing hardware in locations where they have more users. So since we don’t have heavily populated location, we can try to reach location that has better hardware and throughput.
With that idea, I’ve bought two GSM/LTE antennas with total signal gain of 46dBi – this is one of the highest values on the consumer market. According to hardware provider they can reach further than 20km. Two antennas are required to handle both horizontal and vertical polarisation.

Another required device was a router, so I’ve bought Huawei’s mobile router with external antenna connectors.
Feeling equipped, I’ve packed bags and went to the airport.

Couple days later we’ve arrived in mission’s building in El Zumah. There situation was a bit different, mobile devices shown all bars of signal and 3G reception but download was, in best moments, only 100Kbps.
Building height was around 4 meters and we should mount antennas 2 meters higher. A day later we’ve obtained 6 meter long, slightly rusted, pole. This was then equipped with antennas and attached to the building’s side. 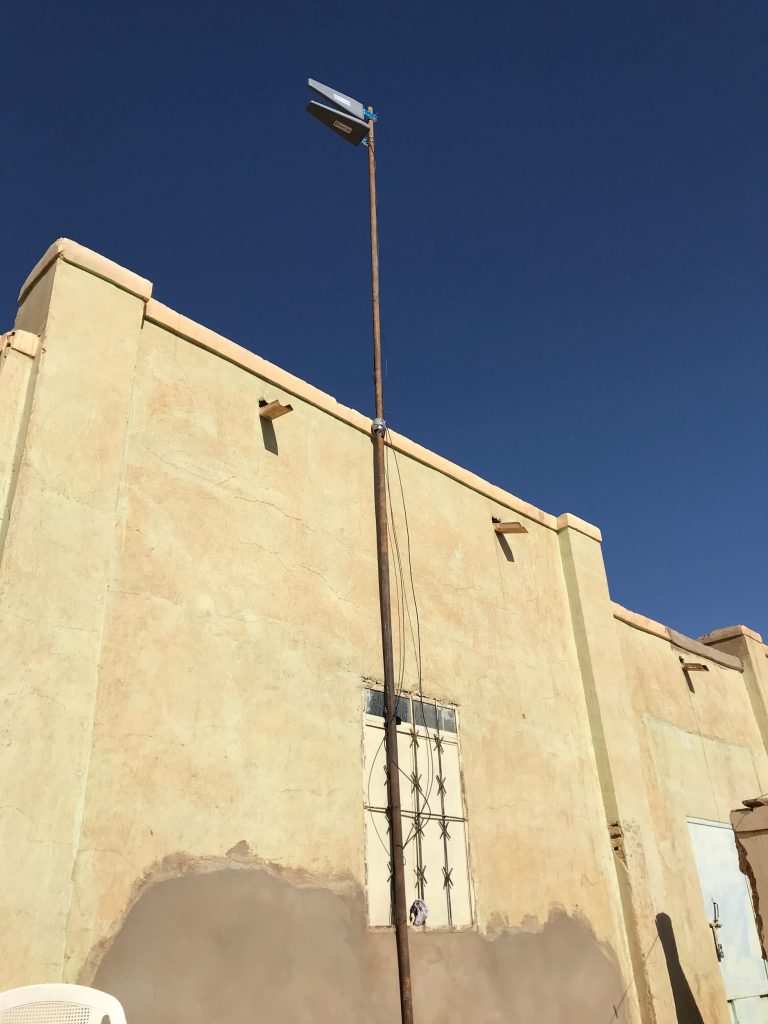 Having that done, I could commence the tests. Since BTS data I’ve obtained earlier could been outdated, I’ve decided to test in steps:

First series of tests, I’ve done on Sudani SIM card. Results were poor for most angles. My conclusion was, local BTS was too near to house and taken over signal despite trying to reach further.
I’ve decide to ignore MTN network as according to data I’ve found, their Base Stations are located mostly around Chartoum, which is 400km south.
Third network was Zain. Couple days later, when I’ve obtained SIM card, I’ve repeated whole procedure.

And there it was, when antenna was directed to Merowe, which has very decent BTS, we were able to reach the peak of 3Mbps. Any other angle resulted in max 100Kbps of traffic or no traffic at all. Despite it being sometimes unstable, it was a big upgrade to previous years and the Internet became usable.
Last touch was establishing VPN connection to provide access to services that are officially blocked because some companies don’t agree with Sudan’s politics.
Before I went back home, I also prepared documentation and manual to team whole stayed there, so they could manage infrastructure themselves and react to issues.

I found whole process being similar to project development. It started with analysis, then gathering of proper tools for work, development and tests. After handover I’ve trained the team and shared the documentation. It was very exciting to challenge my knowledge in new area.