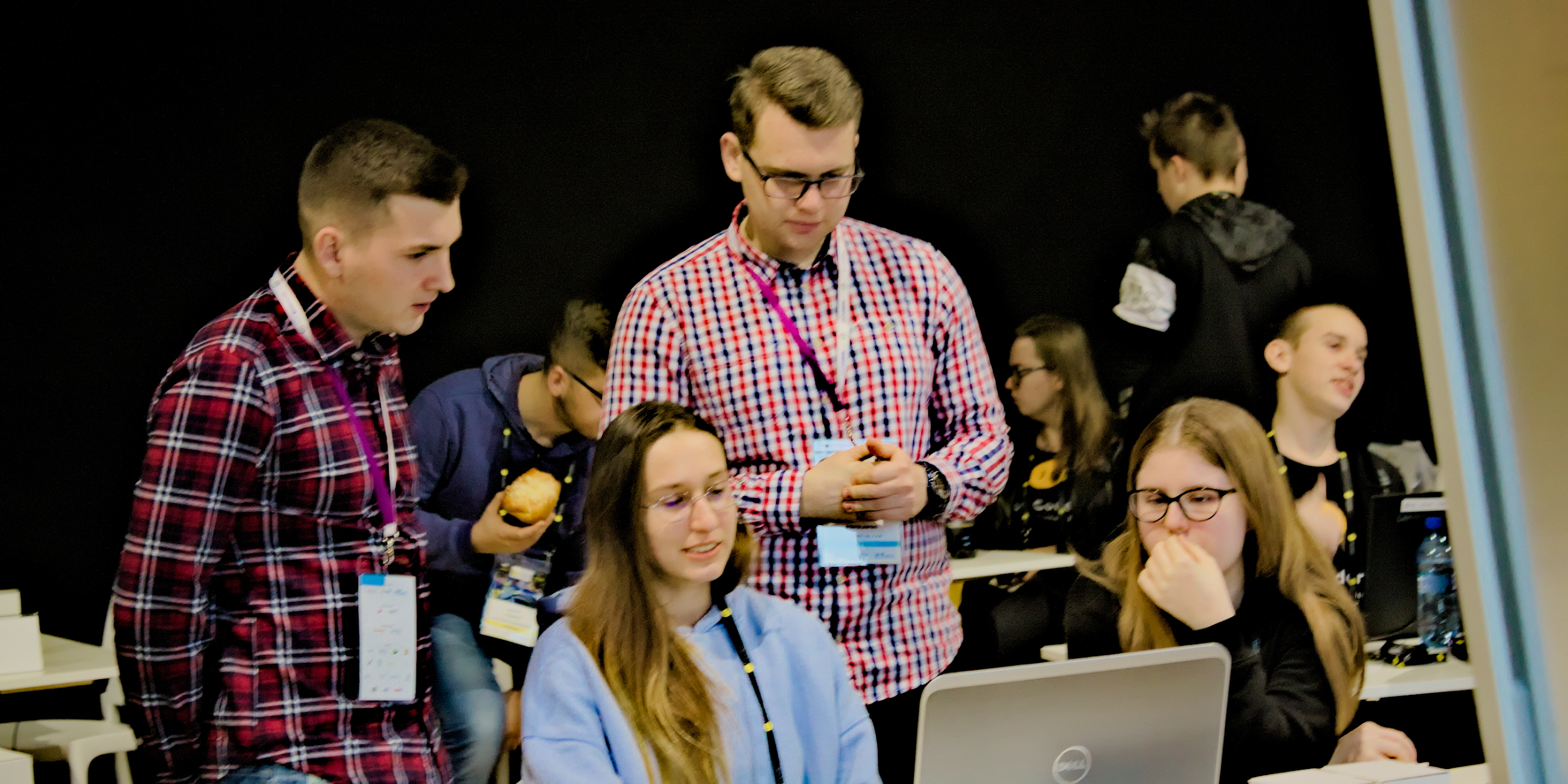 Hackathon is a yearly event hosted in Płock which gathers passionate people with analytic and programming background. Hackathon City Coders Płock is under direct patronage of City Hall of Płock. It is the most important event when it comes to IT in our hometown.

Sensi Labs has been tasked with mentoring role and we must admit, we gladly took the opportunity. Our team consisted of Marcin Bawtrol, Kamil Bonisławski, Jakub Czajkowski, Przemysław Fusik, Rafał Rudowski, Damian Szymański and Paweł Krużyński, so there was project managers, developers and tester. Such a mixture of people allowed us to guide the participants at any level.

It was the third edition of the event and it certainly was the biggest one. There were over 30 teams, each consisting from 3 to 4 people. On the other hand the mentors team consisted of around 20 people and was separated into several groups tackling different aspects of project development. This year the participants had to come up with an idea solving one of the three proposed topics:

We were surprised by the amount of participants which was around twice the number comparing to last year. It was an amazing experience to see so many young people driven by passion, eager to learn and spread ideas. The very same values we all share here at Sensi Labs.

During the event we have noticed great variety across participants. Some teams that consisted mainly of coders knew what the end goal would look like and were focused on creating a real application. On the other hand some teams were more focused on creating mockups that would describe the looks and use cases. Also when it comes to ideas, there were teams that had to develop an idea during the event while others had a thought before the event and came prepared. We have even encountered groups that wanted to try some new programming language and were basically fresh and open to learn.

As the event took 2 whole days we have spread our team so that we could always be available for assistance. There were many teams that we were able to talk to and help in any way possible. Some teams needed guidance in the overall process of developing a project from an idea to a functioning concept. Others needed some hints on how to push things further if they got stuck, maybe some improvements to their current ideas. We tried to motivate the participants but most of all we had a great experience getting to know so many passionate people.

After 2 days of coding fun the event finally came to a closing. The last part was of course choosing the winning team. This year’s title went to „Dev Girls” team which came with an idea of an application that would make the life of seniors a lot easier. The rules of the contest allowed finishing without real application and the girls won by creating mockups supporting their idea.

We were very happy and honoured to take part in Hackathon. An environment consisting of people with ideas, passion and love to programming is always an environment Sensi Labs wants to be in.

We have a few closing words for any future participants of such an event, our recipe for success.

First of all, don’t lose the focus on what the end goal is and try to do some short „meetings” within team or with mentors, so that you can stay on point and know where you are in the project. Secondly, try to have a mixture of different people in the team. You want to have a coding person however someone with graphical abilities that relies on mobile-first design is equally important. You want your application to be well tailored and thought over. Lastly, have fun and express yourself. Being able to translate ideas into real world applications that help people is one of the most gratifying experiences of being a programmer.

How to make faster Internet in Sudan
16 March 2020