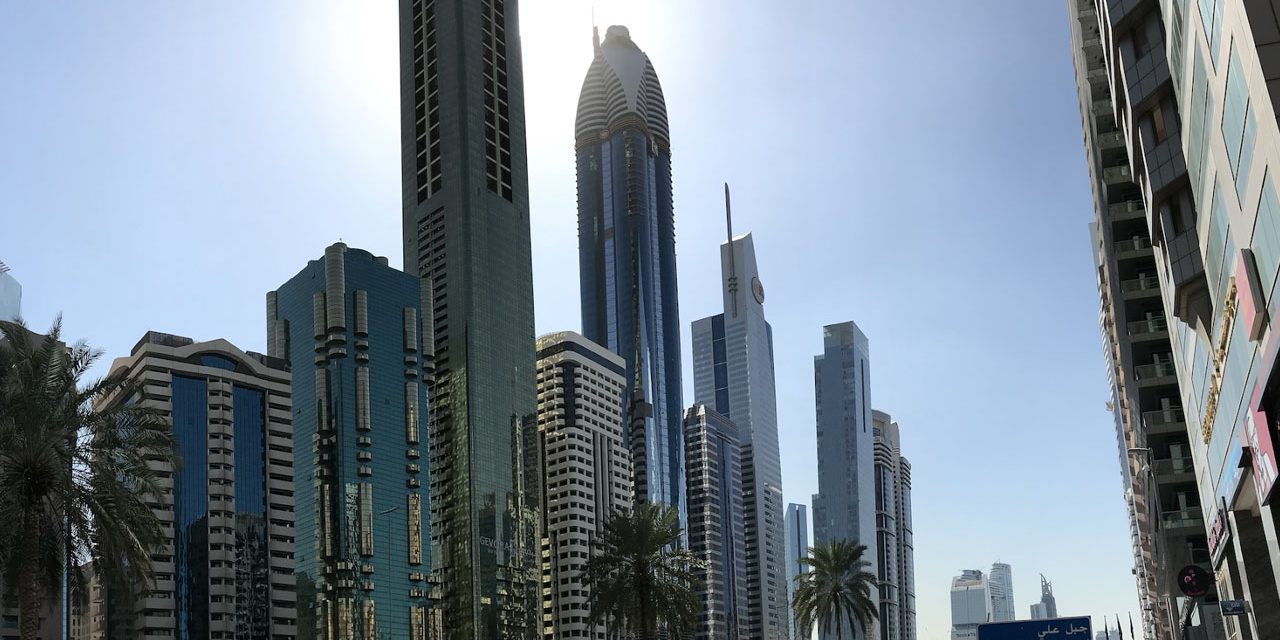 Sensi Labs is providing services for automotive business but some of us also live automotive. Our CTO Tomasz Zalewski is a major petrolhead and once he was back from Dubai, he decided he will share his insights in a form of article.

Dubai International Motor Show is held in the United Arab Emirates and it might be most unique car show on the planet. Why? Because you can start from checking out new Mitsubishi compact model, then witness 4×4 or 8×8 from Streit Group which can drive literally anywhere and finish up with hoverbike owned by Dubai Police. If you’re up for surprises, Dubai is your spot.

Some brands decide to not invest in motor shows and you can witness it here as well. There was no Volkswagen, Volvo, Audi, Peugeot and many more. Some companies say motor shows cost more than they provide marketing. In Dubai, there was also Toyota missing but I think reason for that was different – Toyota is a major player in UAE and from what we’ve witnessed, they might own 30% of market. If you’re important, you drive in Land Cruiser, if you’re a taxi driver corporation gives you Corolla hybrid, if you want a solid daily car Corolla is also your choice there. If you’re peoples first choice, you don’t need to spend money on marketing. 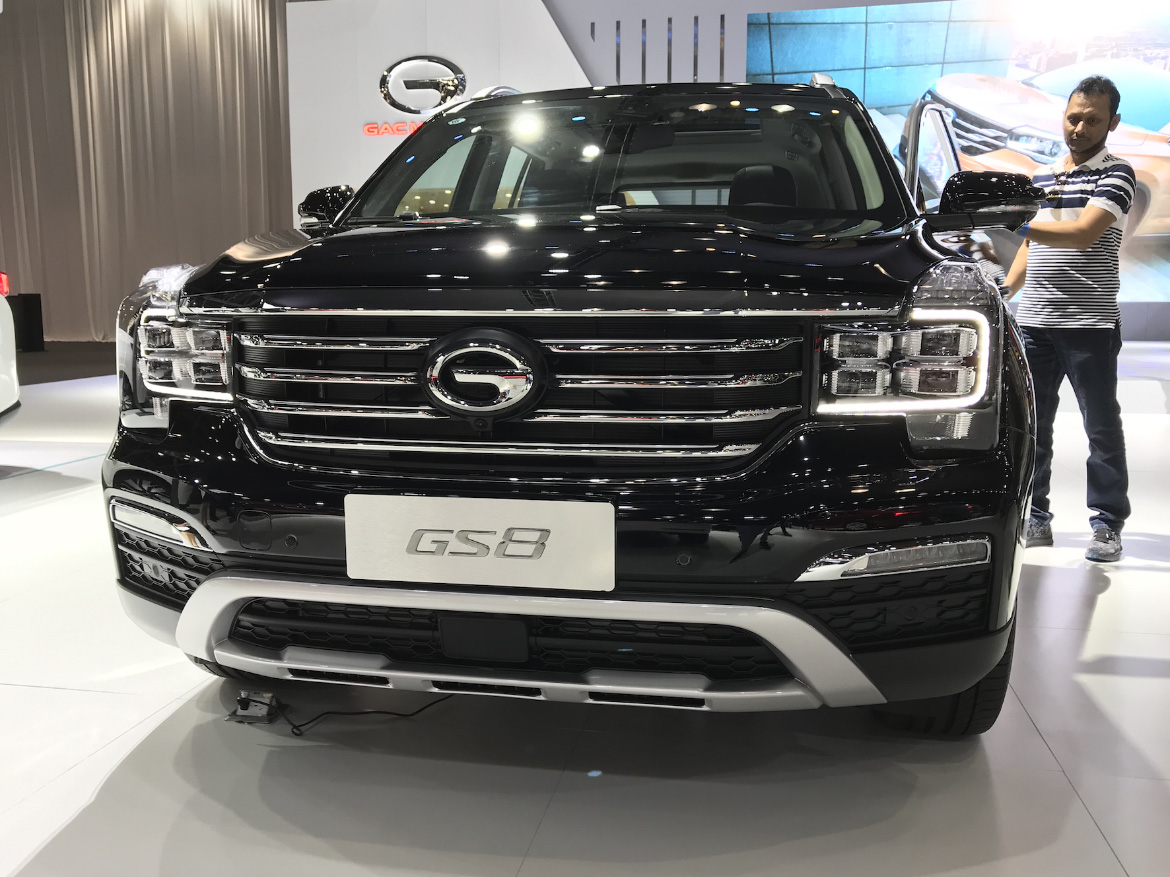 So who was there? Starting from budget range – GAC Motors. A brand which confuses you with each model. If you look at front it remind you some Italian brand, on rear end it’s German. Each of their model is strongly influenced by existing cars of other brand, we’ve failed to find anything unique in them. Same is with interior, each car is absolutely different, to the level where you actually can’t image they are one brand. 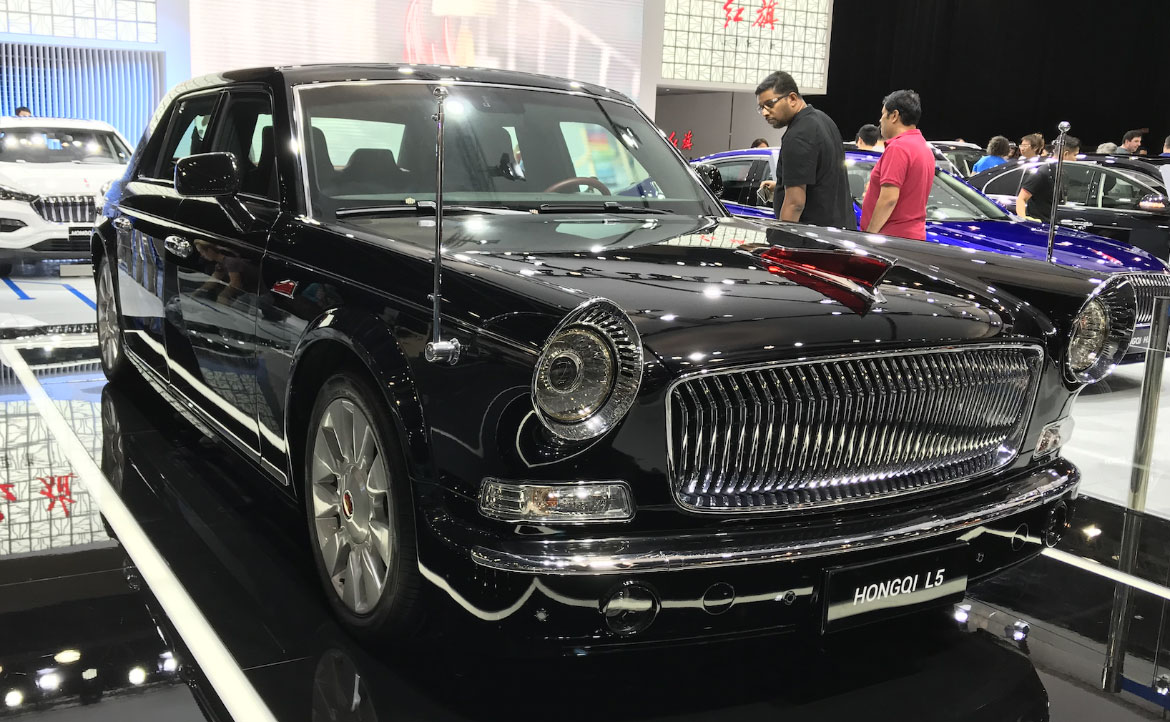 Another chinese brand there was Hongqi, some of you might know it British/American tv show. Their logo is inspired by american Cadillac’s tailfin but it looks good, it makes them unique. They’re provided SUV, limousines and sedan. Except for totally unique royal limousine L5, all of their models lack of any character. They look like copy/paste from world brands and in current world, it’s not enough to find customers.

Nissan model range for Dubai is built from American product line – there was new Patrol, so big that it generates gravity. And once get you get sucked in, the interior is as refined as it’s supposed to be in luxury SUV. If you wish to get something more practical, there was also a pickup. Finally if you need something not practical but fun and fast, there was GT-R 50th Anniversary edition waiting for you. Mitsubishi also decided to focus on Land Cruiser competition and they’ve put new Montero Sport on main stage – largest SUVs must be selling good in UAE. 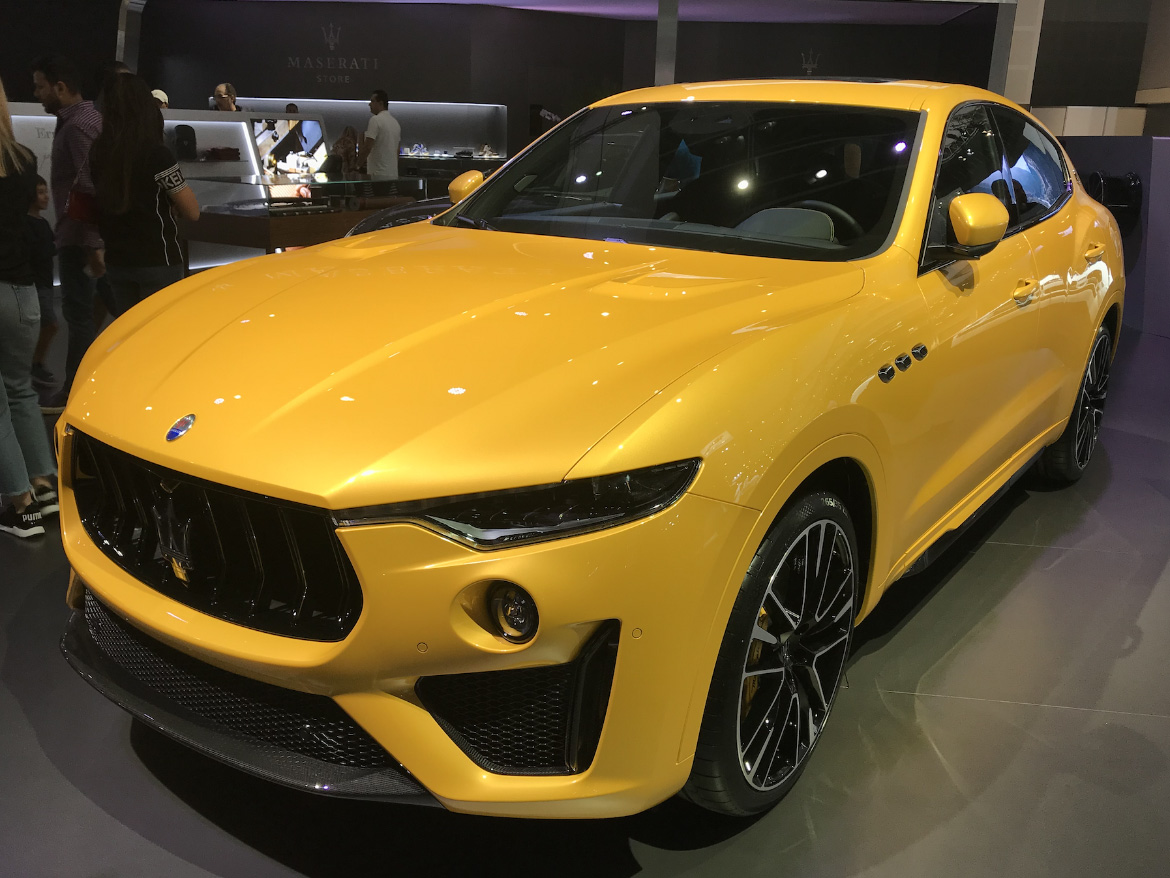 If you decide that you want to step up, you can also choose from variety of Jaguar models, Mercede-Benz, BMW and Maserati. As a competition to above, Cadillac appeared and focused on their XT series SUVs and CT series sedan and of course crown jewel of Escalade. Each car has minimum of 6 cylinders, leather trim and whole lot of supporting electronics. Cadillac’s representative told us that they want to gain more customers in Europe but they don’t plan on engines downsizing, so it might be interesting alternative to 1.2 and 2.0 turbo charger R4 that dominated European market.

If you still feel that is not enough and you need something bigger, another American brands came with help – Chevrolet and GMC brought their pickup trucks which are absolutely fine for Dubai’s reality but don’t get fooled, they are too much for European’s roads and more 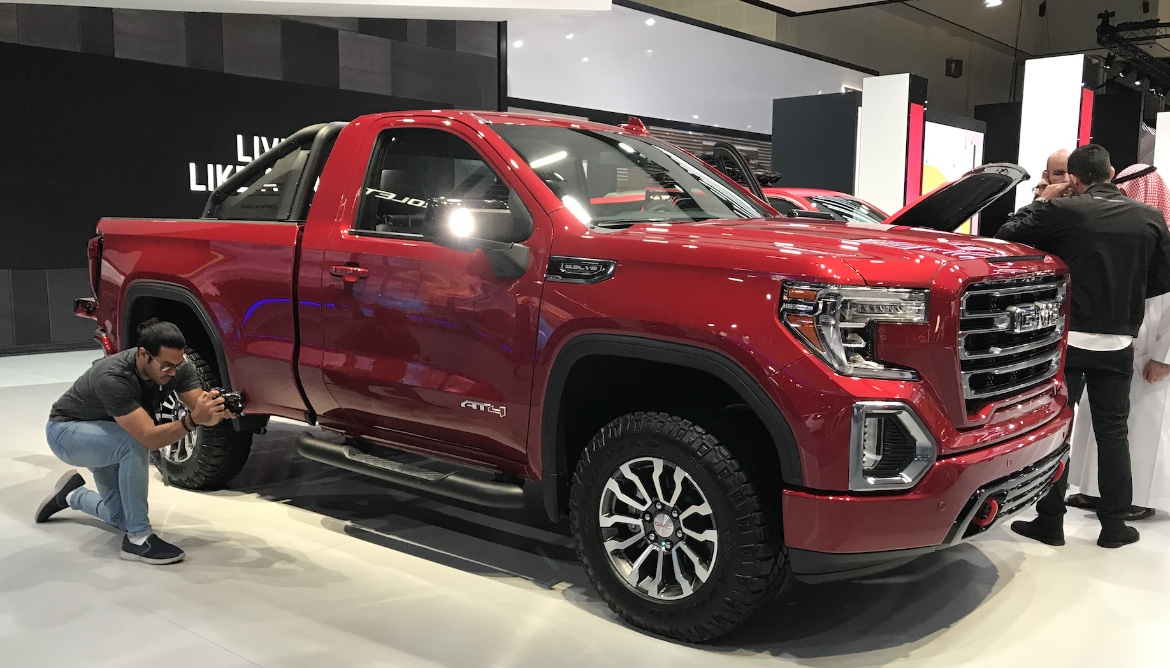 importantly – parking spaces. Yet, we have to admit, they are monumental and extremely spacious cars. Chevy also brought something smaller but it is their most important premiere this year – new 2020 Chevrolet Corvette which after 50 years is mid-engine car again. It looks like an arrow. Short nose, long tail, all sharp edges and aggressive attitude. Looks like a fast car and definitely it will be a great value/speed for money.

If you think luxury and SUV, you have to consider Range Rover. And if you visit this event, you can. Land Rover brought the whole lot: Range Rover, Evoque, Velar, Discovery

and their newest creation – legend that drove on every continent on earth, new Defender. It definitely has a character – it lines are simple, it’s design is very aesthetic and interior is heavy duty and easy to clean. There is no doubt, it’s a car for heavy work, not a boulevard cruiser. Still, it’s so unique, we presume, lot’s of might want it, even if they spent zero time offroad and to be honest, we also have a little crush on it.

If it’s not enough and you need something that floats on water, is bullet proof or blast proof, you’re also in good spot. Russian company Streit Group, presented their all terrain 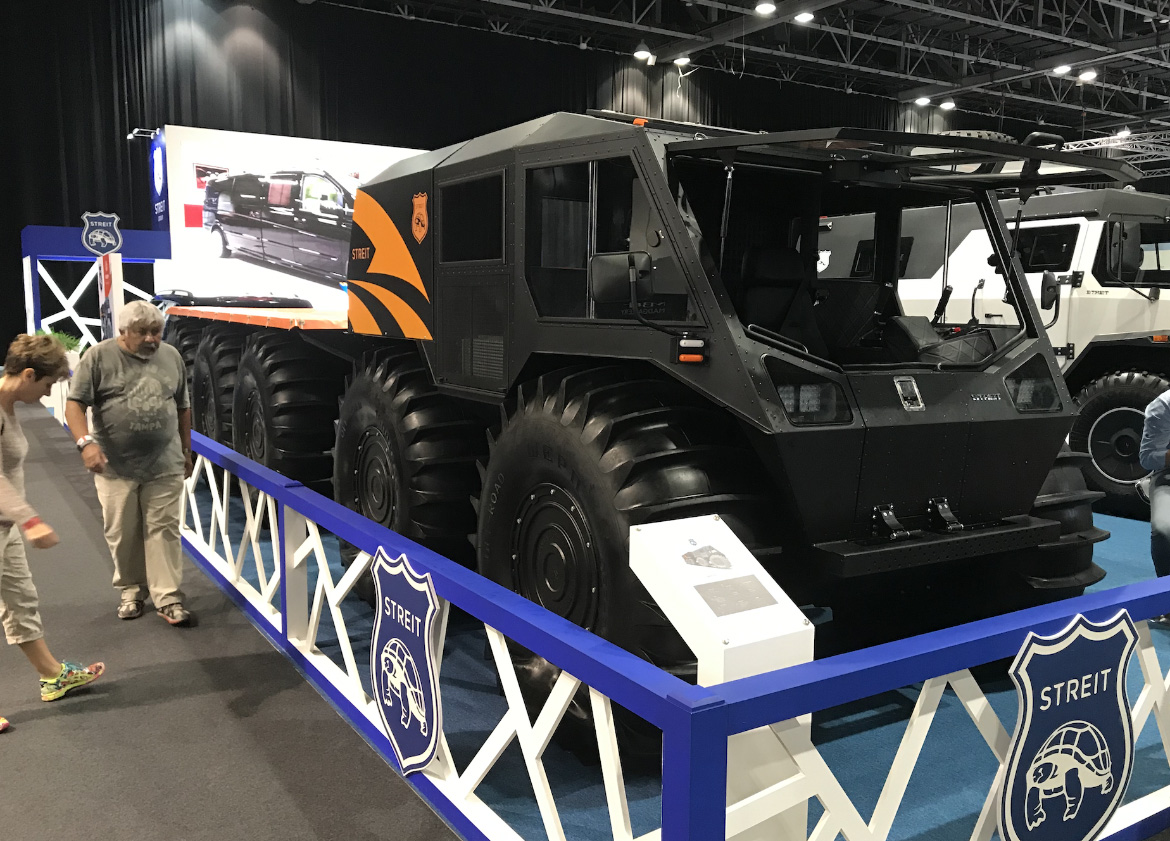 Sherpa which can also swim and works hard in Sudan being food supplies delivery vehicle. They also have other 4×4 and 8×8 trucks. On other hand, Inkas Vehicles is more into bullet proofing their stock – they sell bullet safe versions on Chevy SUVs and also blast proof trucks.

Finally if you decide outrunning danger is better, there was also Bugatti division with newest Divo and Aspark with Owl – fastest accelerating supercar nowadays (1.9s 0-62MPH).
Except for above, visitors had couple more points of interest. Outside of main hall, there a Prodrift academy station where tire squeal and supercharger wine filled air. For as low as 20 GBP, anyone could be a passenger in drift taxi (Dodge Charger and Nissan 370Z) and get familiar with driving sideways

Besides above there was also a supercar alley, showing hidden gems, from UAE’s garages. Those include amazing collection of Porsche, Mercedes-Benz, Maclaren, Bugatti and many many more.

As you see, Dubai Motor Show is full of surprising contradictions, cost and usability ranges are extreme. That’s why I think, it’s a good place to witness automotive market at its finest.